Arrests Made in Drug and Gun Investigation 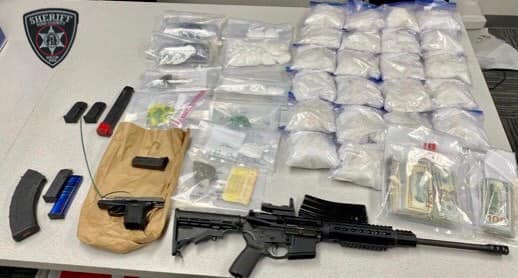 Deputies and Agents searched locations on Pio Nono Avenue, Glendale Avenue, Worsham Avenue, Forsyth Road, Ward Street, Roosevelt Avenue, Brigham Street, and Lowe Court. There was a total of four subjects that were taken into custody they are listed below with their charges.

In total there were over $25,000.00 in cash, over twelve thousand grams of Methamphetamine, one hundred and fifty-four grams of Ecstasy, 87 grams of Marijuana, and four guns seized during the operation.

Melvin Grady Bates, a 75-year-old male of Macon, was arrested for two counts of Purchase, Possession, Manufacture, Distribution, or Sale of Marijuana, and Possession of Methamphetamine with Intent to Distribute. He is being held on an $11,200.00 bond at this time.

Julian Derwayne Coker, a 42-year-old male of Macon, was arrested for Trafficking in Cocaine, Illegal Drugs, Marijuana, or Methamphetamine, and Conspiracy to Commit a Felony. He is being held without bond at this time.

Harry Lee Hopkins Jr., a 50-year-old male, from Macon, was arrested for Conspiracy to Commit a Felony. He is being held without bond at this time.

Jackie Edward Powell, a 44-year-old male of Macon, was arrested for two counts of Receipt, Possession, or Transfer of a Firearm by a Convicted Felon and Probation Violation. He is being held without bond at this time.

This is still an ongoing investigation; more arrests and charges are pending. Further information will be released as it becomes available. Anyone with information about this incident is urged to contact the Bibb County Sheriff’s Office at 478-751-7500 or Macon Regional Crimestoppers at 1-877-68CRIME.